I have been wanting to try this for a while. Compare my 3 big speakers. I’ve been waiting to fit an attenuating L-pad into the Magisters. The new ribbon tweeters were way too sensitive (12.4dB too sensitive I believed). I managed to get that sorted last night, so today I pressed ahead with my personal bake off. 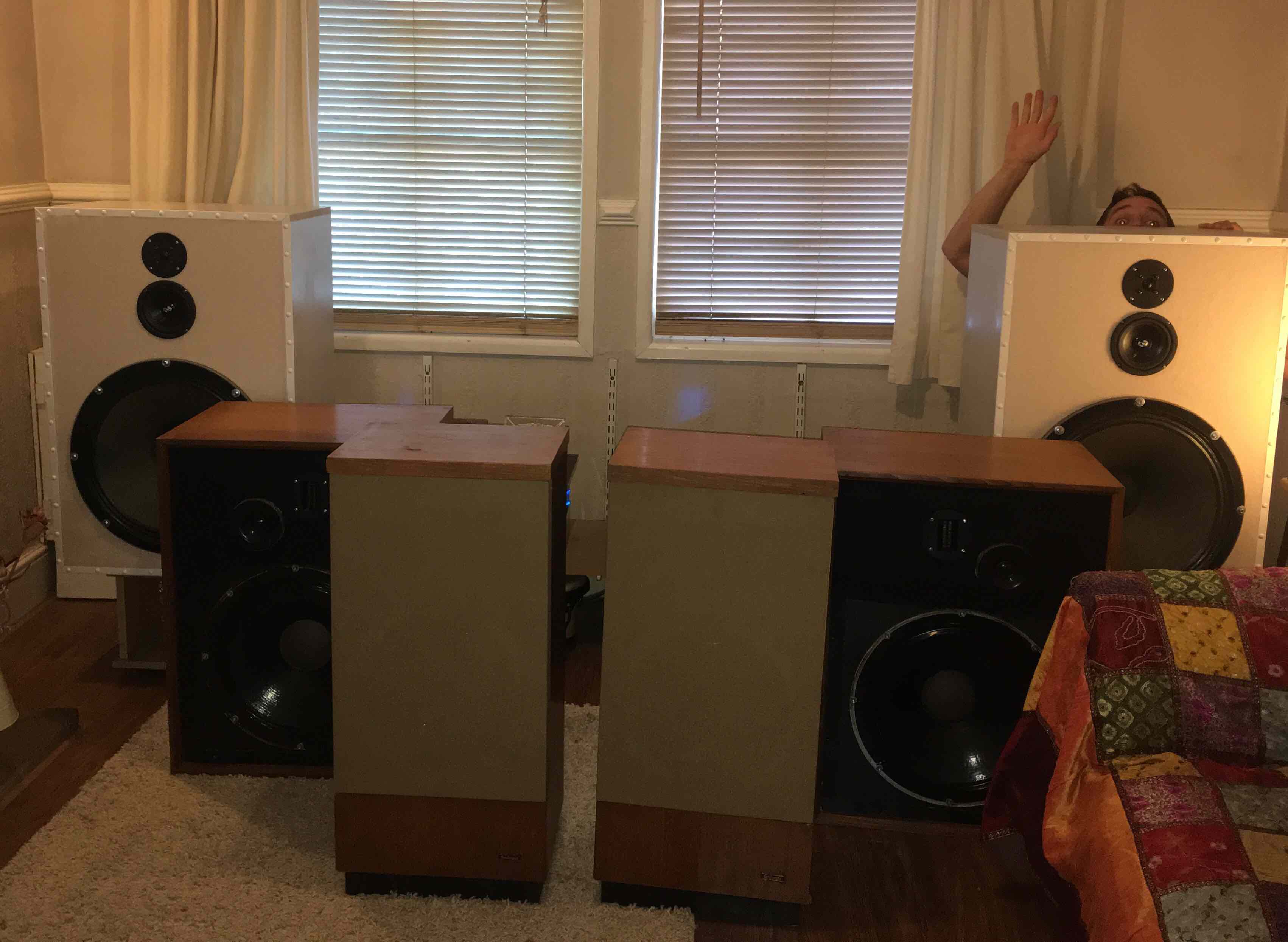 The Magisters I bought last year. I recapped the crossovers, fiddled about with the driver positions on the baffle, rewired, replaced tweeters (now with L-pads).

The Goodwoods are speakers I bought several years ago. Paul of RFC did a huge amount of fine work on them. (New Monacor tweeters (with wave guides), redesigned crossovers, rewired, strengthened cabinet, replacement woofers (which he also doped).)

The Humungisters I built a couple of months back. I was inspired by the simple design of the Magisters. The Humungisters are basically that tunred up to 11: A big single enclosure with a sealed back midrange and an old huge sod-off woofer from the golden age of Goodmans. Presented in neutral hues.

Here is what I found.

Midrange was less present that I’m used to  having lived with the Humungisters for a month. And what midrange the Magisters did produce sounded relatively coarse. Voices a little brittle. Lacking presence. The Magisters were at their best with sounds constituted more of tweeter based sounds - smaller cymbals and the snare of a snare drum sound more convincing. Possibly this strength is due to the ribbon tweeter.

Overall the sound from the Magisters is a bit “sat on”. Perhaps I have attenuated the tweeter a little too much (although increasing the high frequencies digitally made things sound a bit harsh today). Perhaps the L-pad clutters things per-se. Too much stuff in the way. In any event, I’m a bit confused as they sound worse than I remembered they did before I fitted the L-pad (and the 12dB attenuation was being done digitally).

Imaging sometimes a bit smeared, possibly as a result of the shaky midrange, and the possibly recessed treble. The speakers produce a less engaging / distracting sound than the other two. I am finding myself looking up less from my laptop to visually pinpoint sounds in the sound stage between the speakers.

Bass is wonderfully warm and rounded in the lower octaves. Kick drums have great impact. Not as textured as the bass from the other two speakers, but certainly more prominent. The bass in dub music sounds very impressive. So the Magisters are enormous fun with this, if a bit crude. Basically these Magisters, in their current state are all about the bass.

Overall, the sensitivity of the Magisters is the lowest of the 3 speakers. I reckon on about 86dB.

Immediately smoother than the Magisters. Greater brilliance to the tweeters. Greater presence to midrange. A more complete and accomplished sound. Acoustic guitar sounds much more real. There’s just more of the frequency range present in equal measure than with the Magisters.

Very occasionally a tiny bit splashy / harsh in the midrange. Especially at higher volumes. This was the only disappointment of any significance when I was listening to the Goodwoods. The Goodwoods midranges sounded very much more accomplished relative to the ghostly Magister midrange, but again, those old Goodmans squawkers seem to be the weakest link!

Bass is a shock. Inevitably the 12 inch woofers lack the really deep bass extension of the larger woofers in the 2 other speakers, but the bass from the Goodwoods is deeper and more impactful than I remembered and expected. I was genuinely surprised by how much low energy emerged from the “Pick a Dub” album through the Goodwoods. (This was the first time the Goodwoods have met the One4 class A power amp, so I hadn’t heard the combination before.) Also, the quality of the bass was a positive. There was a more refined and even bass response across the woofer’s range than the Magister. At less than half the woofer area of the Humungisters, the Goodwoods certainly have the best bass-per square inch value of any of the speakers here.

They do sound smaller though. Very hard to describe this. Possibly partly psychosomatic. The Goodwoods are big speakers, but simply not as physically massive as the Magisters or the Humungisters. Listening to the Goodwoods today and comparing them to the other 2 models, I got the impression that the sounds were being made by slightly miniaturised instruments and musicians. Whether it’s the size of the enclosure or the size of the woofer, things just sound bigger. Larger speakers seem to deliver more scale than simply a deeper bass.

I was aware of a strong bias towards these before I plugged them in. I made them. I really need the opinion on them and the other speakers I have of someone who isn’t my son. (When asked to compare the sound of my system to the sound coming directly out of his £100 Asus tablet: “Oh. OK…Your speakers sound more…muffled. I like my tablet’s sound better. Don’t worry dad – it’s probably just personal preference thing”.)

The Humungisters were certainly the most sensitive. Based on the driver specs they’re probably around 91dB. They also go loudest (the Goodmans midranges in the other two speakers give out once the volume gets to 80%. Damn those Wonfor Watts). They were also the most open sounding and dynamic: Instruments were very well separated and subjectively the most dynamic.  They were the most forward in the midrange, which was flatter sounding than those slightly shaky Goodwoods drivers, though somehow slightly more grainy.

I put no foam or wadding at all inside the Humungisters. I have found that in general I prefer speakers to have none than a lot of foam and wadding. Things just sound more open to me like that. I probably should experiment with whether “some” might be better than none.

Unsurprisingly, these were certainly the biggest sounding. Although at equivalent listening levels there was less bass present than the Magisters, this is probably a reflection of how balanced each speaker is across the frequency range. The Humungisters have better bass, if less of it proportionally.

I like my DIY jobbies. They are certainly the ones that will be staying in the main system.

My Magisters are currently sounding disappointing and I need to give some attention to the tweeter attenuation. But, I fear the Magisters are ultimately limited by their midranges. Maybe one day I’ll look at replacing those.

The RFC-modded Goodwoods remain very good speakers. Probably the most refined of the bunch probably. And, as they are by far the smallest speakers here, the amount and quality of bass they produced were the single biggest surprises of this exercise.

To my ears, the biggest losers of my bake-off were the old Goodmans midranges in the Goodwoods but especially in the Magisters. Another loser is my current L-Pad arrangement on the Magisters. As mentioned, this solution needs reviewing. I may try a single resistor on the Magister tweeters. Just to see. I know a single resistor plays theoretical havoc with the crossover point, but I’ll see what happens…I didn’t hear any problems when I put 0.5R in series on the tweeters and midranges in the Humungisters.

In general, one thing I learned is that novelty per-se was the biggest single issue. It was the immediately noticeable changes that I noticed immediately (funny that). And the changes always sounded a bit “weird”. And, not always in a good way. As my ears became more used to the “new sound” of each “new” speaker, the difference per-se became less significant and in each case the speaker became more listenable.